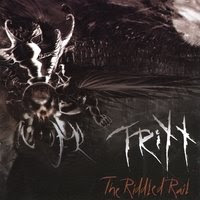 Trixx is a newer name on Canadian rock market. They are female-fronted band, and its line-up are consists of 4 musicians. Judging by informations from its press material, they worked hardly and they have received some very positive recognitions both from collegues and audience."The Riddled Rail" is their debut album, and band introduced themselves with 13 tracks in.
The have very talended female singer Jessica Crowe, and her optimistic energy and emotional approach is a strong band's weapon.
"The Riddled Rail" comphrises very fine songs, and band has showed a respectable authors capabilities. Musically, they are on therithory of 80's rock/hard rock, and in many segments thay know to reminds on well-known acts, established in mentioned era as a Girlschool, Rock Goddess, Lee Aaron...Melodicity is also a leading element in its approach, where many of present songs posses a radio acceptables and potential hittish dimension. "The Riddled Rail" is recomandable album, especially for the followers of 80's hard rock and melodic hard rock tendencies. Their works surelly deserve a chance...