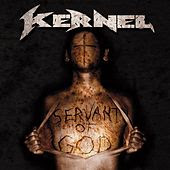 Out of Milano, Italy comes a Kernel band, active some period on domestic underground scene. But, I have to say that during the brief period, a group did a lotta' efforts in promotional activities, so many worldwide webzines writes about its music. During the February this year, a group debuted with " Servant Of God " album, done as a self-financed issue, but helped with "Punishment 18 Records" distribution duties.
With 9 equalizing tracks, a group has introduced themselves as a thrash act with older school views, but with not so basic or uninteresting additional elements. A band performs on convinceble way, with interesting arrangments includings.On the other hand, a harsh vocalizations leads them to so call hardcore therithory and create an unstandardized atmosphere. A production work posses strong 80's and 90's approach, but band's realization
communicate with standards of our time too. " Servant Of God" is a promising debut, worth
listener's attention, especially acceptable for the thrash followers.