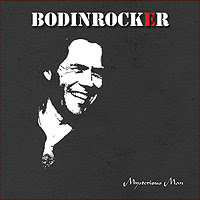 
Anders Bodin aka Bodinrocker is longest period in the saddle. He is from Gottenburg, Sweden, and musically, he is faithfull to 70's rock legacies. I have to say that his entire carreare has a respectable promotional campaighn on net, and his actuelle album " Mysterious Man" has been introduced in many webzines, nationally and abroad. " Mysterious Man" are consists of 10 pretty listaneble and melodic tunes, done in mentioned 70's rock manner. His works knows to remind on Status Quo approach, equally vocally and judging by performing threathenings.
But, melodicity is a key weapon of Swedish rocker, and complete materials posses a radio friendly usings. Many of present songs are very, very listenable, and also acceptable for gig performings. Nothing specially new, but Bodinrocker offers a good feelin', enjouable songs and positive vibrations..