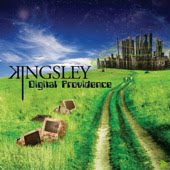 KINGSLEY - Digital Providence
Written by Branimir Lokner
Monday, 02 May 2011
KINGSLEY
" Digital Providence "
( Self - released ) 2010.
CD - USA
Modern rock/melodic rock/power pop/pop
Kingsley are four piece band, founded back in 2007 year. They are hailing from L.A. and its actuelle full - length has received some positive reactions and recognitions. " Digital Providence" is a name of album, and Kingsley has introduced themselves as a pretty melodic act, with modern rock/pop includings in its approach. All of present songs posses refine melodicity, catchy choruses, distant playings, relatively modern arrangments, and good production too. On the other hand, we can not find here and there too much originalities, but a group provide enjouable three-four minutes songs, a general pleasent atmosphere and good vibes as well. L.A. fellows are influental by the British 80's and 90's pop movement, as same as USA 90's waves. Also some of post new wave traces we can hear in its materials.
But Kingsley aren' t a retro act, even that all of mentioned elements exists in its music. There's no doubt that they are a serious group, and we'll see what the near future brings...
Rating : 7 , 5 / 10
C / o : www.kingsleylive.com
www.myspace.com/kingsleyla
Posted by Branimir Lokner at 12:27 PM