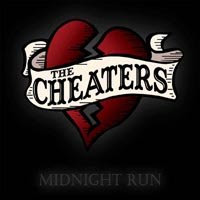 The Cheaters are another pretty interesting newer act, whose musical legacy communicate with southern rock tendencies. They were formed back in 2005 year, in Baltimore, Maryland, and complete line-up ( 4 members ) are consists of previous experienced musicians. During the 2006 year, they debuted with "The Cheaters L.P.", and in the next period they toured around the state, and also in Japan and Europe.
" Midnight Run" is their actuelle second effort from previous 2009 year, released with own forces. They have introduced themselves with 12 pretty equalizing tracks, and generally fresh materials. A band is on mentioned southern rock therithory, but its songs are done also in classic rock manner, and hard rock approach is present as well. Their songs also posses evident melodicity, but group has showed a certain playings and performings. A members from The Cheaters are well-trained musicians, and that's evident after listenings of just few tracks from its album.
Frank Marchand and band did a productional work with expecting standardization and same realization. " Midnight Run" is an issue without weaker places, and USA act has showed a highest capabilities.