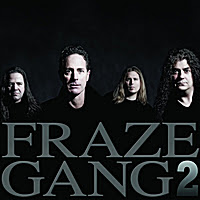 
Fraze Gang are consists of 2 former members of Brighton Rock group, one of the national well-known, but unfortunatelly
underratted acts, and also of 2 veterans from Canadian scene. " 2" is their actuelle product, a CD with 10 tracks in.
Fraze Gang concept is simply, but convinceble enough. Its approach is tipical 80's hard rock /metal, fullfield with clear
melodic hard rock additionals. They strongly associate on a groups as a : Santers, Ratt, Helix, but after listening of
its album, it's also clear that they know how to put right thing in right place. Fraze Gang delivers a knowing and repeatable
riffs and melodies, and all of present songs are followed by modern productional includings. " White Lightning", " Tough Enough",
and " Don' t Call Us We' ll Call You", are some of the highlights from its well-done album, especially interesting for the
followers of 80's metal/hard rock tendencies.

Posted by Branimir Lokner at 9:30 PM