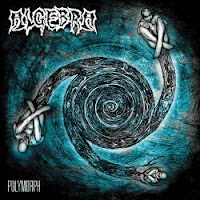 
Algebra is a newer act out of Switzerland, formed back in 2008 year. During the forthcoming period a group has released a one demo, EP, and finally a full-length, entitled " Polymorph ". A Swiss fellows works as a quartet, and they are faithful to old school genres variants.
Some similiarities and influences leads to groups such as a  Testament and Slayer , but a band has offered a fresh energy, evident enthusism, and respectable performings. " Polymorph" are consists of  9 equalizing tracks, with agressive riffing and shouting offerings, as same as with modern productional additionals. I can not find some other so call hidden message in its offering, but Swiss guys  under the thrash metal as a genre, has showed some well-done " tricks" and playings.