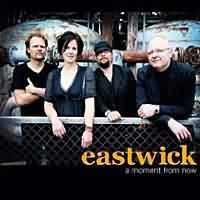 
A Swedish quartet Eastwick started out its story in 2008 year, and discographically debuted in 2010 with 13 tracks album, entitled " A Moment From Now" . Musically, they combine elements of americana, folk and pop in one unusual way, with  interesting arrangmants includings, and with unclassical performing realizations as well. They use cello, banjo , oftenly as a leading instruments, and its album also characterize a presence of covers as same as original authors works. I will especially  recomand a band's versions of Bon Jovi song  " You Give Love A Bad Name " , and Mary Chapin Carpenter tune " Jubilee",  as a quite different than originals, but also listenable and with interesting performing realizations. Eastwick has offered its own views in known musical therithory, and in many aspects they sound "optimistically", but at the same time as a serious act...