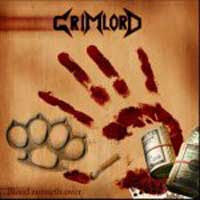 Out of Wroclaw, Poland comes act Grimlord, founded in 1999 year under the monicker Vallachia, and in those period they were faithfull to black metal. During the time, they changed-up own directions and interesting spheres, and through previous years they released a several Demo issues. "Blood Runneth Over" is its first full-length, and I have noticed that Polish fellows did a lotta' effort in promotional activities,cos' net is full of reviews of their album. Grimlord work as a trio, and as a band deserve some sort of respect, cos' all of members posses special pasion to own music legacy.

On the other side, their album, where we can find 11 tracks in, conceptually, and judging by offering genre's options, are consists of unusual mixture, where exists a free places for different metal and rock variants, from power metal, to softier variants of thrash and progressive, but also classical hard rock and heavy metal elements are present here and there. A method of threathening vocal lines is nearer to approach of progressive metal acts realizations, than for example, the case is in power metal performers, and band's expandier arrangments creations, also knows to escape of metal as a genre. I can add, that band created its arrangments as a experienced act, but also is evident that technically, album materials failed in few places. "Blood Runneth Over" is untipical album, and that will be interesting face it with its carrear in forthcoming times.