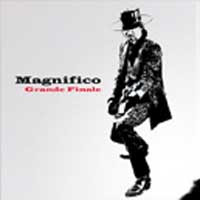 Actuelle Magnifico album from previous year in Slovenia had been distributed through magazine "Delo" distrobution chains. During the last decade, Magnifico did a lotta' effort in self promotion and artistic popularization on Ex-Yu therithory, and to be honest, excluding Slovenia, when he is a real star, he moved up something positive. In his way "Grande Finale" one more time recycle and analyze his basic authors views, evident on practically his complete discography opus, and one logical line, clear in musical, and as same as on lirical field, is present here.

When he parody Balkanian so call ethno pastiche, he shows a higher ground of originality. Even that you will certainly receive a clear perception, when you hear a few tracks what you will get through following songs, cos' the same formula he repeats from album to album, Magnifico songs aren' t boring, or uninteresting at all. It seems also that this time, he didn' t suffer of so call overproduction, and in my opinion productional work is more acceptable to audience , then in some of previous cases.