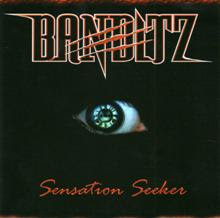 Out of Verona, Italy comes an interesting act, named Banditz. Their carrear is constantly up, after the period of Summer 2006 year, and consolidations of formation.Nicotine Sam ( all guitars ), Fabian ( bass ) and female-fronted singer Jade, nucleus of band joined forces and during the previous 2007 year, recorded an album materials, consists of 8 newer tracks, 3 are taken and arranged from the Demo "Human Phobia", and one song is taken from the first Banditz promo "Dirty Gamez".
"Sensation Seeker" is a modern issue where elements of rock, metal and hard rock travels together in one direction.A band has offered a furious energy, some power pop spices, and clear performing message. A female singer Jade knows to remind on Pat Benatar in some details, but her frantic vocal transformations in practically each songs are band's maybe strongest weapon. There's no doubt that Banditz are original act, and their album didn' t fail in any classic trap. Their songs are also listenable and recomandable for no-metal/hard rock orientire fans.