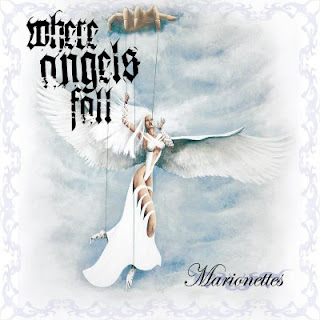 Norway act Where Angels Fall is active on scene from 2004 year. A same year they have released an EP "Dies Irae", discographically followed by full-length "Illuminate", released in 2006 for "Edgerunner Music". In the 2008 year a band parted ways with mentioned "Edgerunner" label, and actuelle issue release with own forces, as a self-financed album.
A Norway act have in formation a female-fronted singer Eirin Bendigtsen. She has a pleasent
voice, and her method of vocalizations mostly create an atmospheric elements of each songs. WAF plays own variant of goth metal, where electronic elements coolide with classical and standardized performing options.Its songs also posses melanholic dark rock traces, but generally, a melodicity is main element of offering songs. A present tunes also posses equall qualities, and production is also modern. It's interesting that Norway act less energy gives to so call extravaganza or glamour, and untipically for that sort of groups are nearer to one natural emotional approach. As a album"Marionettes" surelly deserve a wider audience attention, not only from so call genre's die-hard followers.