Malecoda - The Hordes Of Annihilation 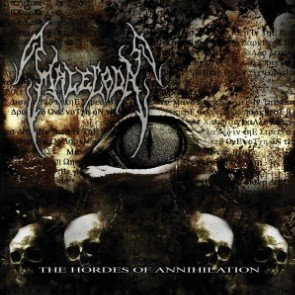 Malecoda - The Hordes Of Annihilation

Certainly, a newer hope of USA underground metal scene should be a band Malecoda.
They work as a trio ( even that momentally in formation missies a drummer ) , and some months ago they have released with own forces an EP with 5 tracks in entitled "The Hordes Of Annihilation".
Malecoda are on the field of death metal, with influences comes out from the 90's, but very wise and clever arrangments works, and absolute missings of any boring elements equally in performing options, as same as final realizations, shows that they are promising and interesting band.
Growl vocalizations, as same as backing performings, oftenly were done in slower mood, and group threats mentioned details in similiar way, like the case is with doom acts. Bit in finalization, americans has given an interesting and unique mix. In presents songs also are evident often atmospheric and mood changes, and each track separatelly is different among them. I would mention a personal favorit from its issue as a better one - "Inhuman Suffering". So, without a doubt a band's debut respectabelly promotes its ideas.

Labels: Malecoda - The Hordes Of Annihilation