HION MARTELL - Will Cure Any Disease 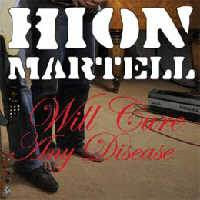 HION MARTELL - Will Cure Any Disease
Written by Branimir Lokner
Thursday, 10 February 2011
HION MARTELL
" Will Cure Any Disease "
( Viskningar och Vral ) 2010.
CD - SWEDEN
Rock/classic rock/melodic rock
Hion Martell is a Swedish five piece band, active continiously on national scene for several years. With actuelle one, they have released a 7 albums, a latest product for " Viskningar och Vral " label. Musically, Hion Martell mixes a several mainly 70's rock genres in their specific way, so we can find in its materials a glam rock influences, classic rock includings, and modern/melodic rock threathenings as well. A melodicity is imporatant part of its offering, and most of the songs posses a radio friendly usings. A musicians from band has showed a vivid performing experience, and all of present songs are done with fine realizations. A few tracks certainly deserves again listenings, and I would recomand a second tune " Built As A Boxer" , and 9th, Stones influental song " Don' t Mess". " Will Cure Any Disease", if you prefer older rock tendencies, transfered in modern rock and also productional way, could be a favourable album for your taste, in any other cases musical offering of Swedish fellows will not take your soul....
Rating : 8 / 10
C / o : www.myspace.com/hionmartell
www.hionmartell.com
Posted by Branimir Lokner at 8:46 AM