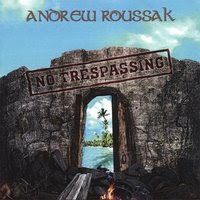 There's no doubt that Andrew Roussak is nowadays one of the most prolific keyborder/pianist on progressive therithory. Born in Russia, and relocate to Germany in 2001 year, he is active as a free lance artist, studio musician, and composer. He won the "German pop & rock award as the best keyborder and instrumental soloist in 2006 year. He is classically trained performer, but his technique also clearly communicate with modern musical heritages. "No Trespassing" is his debut, recorded in various studio locations in France, Germany and Russia.
Together with his collaborators, he has created an album materials full of colorfull themes, a fine keybord passages, and more than convinceble arrangments creations. His progressive/symphonic offering finds inspiration in 70's sympho rock legacy, and as a performer Andrew also use to name it his older collegues - Rick Wakeman and Keith Emerson as a leading
influental tandem. I would also like to mention another keyborder as a possible comparabile to Andrew's performing style and that's a nowadays maybe underrated Dutchman - Rick Van Der Linden from TRACE/EKSEPTION fame. Except two classical transpictions, complete other
present materials belong to Andrew's authors work.
In very refine and inteligent way Andrew knows to connect 70's period with nowadays options, and his album clearly confirms that opinion.
"No Trespassing" is more than recomandable issue, acceptable also for the followers of older as same as newer progressive tendencies.