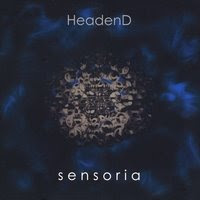 A newer important progressive adut could be a band Headend. Ray Bontempi and Joe Halgas are only members in formation. They hails from Philadelphia, Pennsylvania, and have spent a five years performing together, and three years in the making/creating album materials.
"Sensoria" is their debut issue, released during the October, this year. Many various and in the same time common things had occupied interests of Headend members. Ray and Joe has offered own vision of progressive music, where exists many things in-between, as a fusion, hard rock,
grunge, jazz-rock and many alter options. In some moments we can hear a "known" sequences comes out from earliest Pink Floyd or Rush legacies, but also breaking phrases known from Primus or in the other hand Dream Theater kitchen. Headend also has threathed arrangments approach in one specific way, and many so call "strange" or unexpecting challengies are presents on songs from a CD. As a album "Sensoria" is acceptable on first contacts and easily occupies listeners attention. But, also many hidden details simply need to be discovered. Under the progressive as a genres form, Headend has recorded an innovative and promising debut.