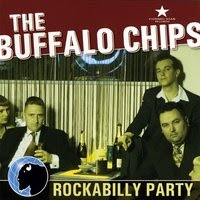 Out of southern part of Germany comes a band The Buffalo Chips, active on rockabilly/revival circuit practically from 2000 year. They work as a trio, and till now they have also received a some official nominations. A first discographical step was an EP " Cucumber Beat " ( Blue Lake Records ), but a band also participated in various compilations. Actuelle album "Rockabilly Party" a band had released both on CD and vinyl.
The Buffalo Chips are explosive trio, and at the same time a modern rockabilly act. Their approach also has accepted a various known stylish elements as a swing, dance, bop, stroll, classic rock and roll... They rather performs a faster-up songs than slower themes, but generally, all of offering album materials a band productionally did in modern way. There are a 17 tracks/tunes on album, with various influental arrivals, so band has taken something from 50's, 60's, 70's, 80's... revival traces as well. But, complete materials were done in one evident modern and fresh way.
A recomandable track for repeatable listening could be a pretty interesting version of song "Walk Like An Egyptian".