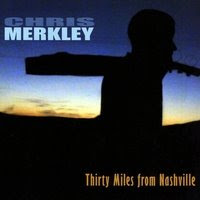 Chris Merkley is a songwriter, active as a musician from his earliest youth age. "Thirty Miles From Nashville" is his 5th discographical offering. Before mentioned actuelle one, he has released also a two solo issues, 1 album with THE CROONERS and one with his friend Steve Morgan. He has included himself on several other projects too, and beleive or not he toured USA six times, and Europe countries four times.
"Thirty Miles From Nashville" has introduced Chris as a original songwriter. Musically, he blends elements of rock, roots music, blues, country, and also hint of americana is present in his authors and performing views. Each of offering songs posses a different atmosphere and performing motorizations, and a different mood stages balancing between them. A production is rather raw and unpolished, bur Chris has succesfully showed a varies performing and authors skilness. He has offered a more than interesting materials, and "Thirty Miles From Nashville" simply deserves listeners attention.