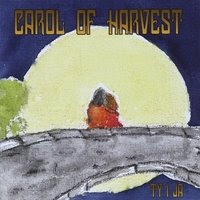 Carol Of Harvest was a German band ,discographically active on national progressive underground scene during the period of second part of the 70's. A band also has recorded a one album in 1978 year, and received a respectable attention in progressive circuit. After the years of silence, Axel Schmierer, guitarist, composer and key person from band, reunited forces with Ewa Grams, also vocalist and lyricist, and recorded an album, entitled "Ty I Ja". We haven't here a classic reunion of Carol Of Harvest band, even that as Axel explains, many similiarities in author's approach and musical realizations exists in both cases. Ewa comes from Poland, and duo decides, that new songs had to be sung in Polish language.
"Ty i Ja" is seriously recorded album, with quite convinceble technical realization. A duo has offered a 15 equalizing tracks/themes, "located" somewhere between 70's and 2000's. With her really pleasent voice, Ewa in specific but very natural way, create an unusual atmosphere, and all of present songs posses similiar ambient and realization. Musically, we can threat its offering as a sort of folk/progressive approach but with evident ambiental additionals. So, we can say that some influences comes out from legacies of groups as a : Camel or Barclay James Harvest, but also some "themes " from Clannad kitchen a duo has cited in its works. But, even of mentioned opinions, Carol Of Harvest were done a quite good job, and " Ty I Ja " album is recomandable both for progressive and folk followers.