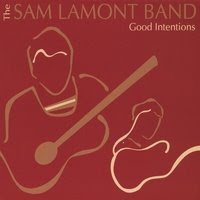 Sam Lamont is Morgantown, West Virginia based artist. He is a singer/songwriter, and till now he has released one solo album, and another, still actuelle, entitled "Good Intentions" with the band. He was also received some nominations, and his carrear is constantly up.
"Good Intentions" looked the light of day in the first months of this 2009 year. As a author, Sam mostly communicate with roots based music, folk rock, blues, rock, and even americana elements. All of his songs posses a strong realizations, and it's clear that The Sam Lamont band
has sounded as a well-trained team. In many cases, Sam's musical offering knows to remind on legacy of legendary Neil Young, and especially 2 themes - opening "Free', and 9th "Feel It Workin' ", has something clearly comparabile, but a mentioned detail didn' t minimize other strong qualities of Sam's authors works. On the other hand, we can not find any weacker or less convinceble moments on "Good Intentions" album, and present materials generally deserves only positive reactions.