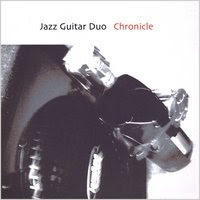 Yuichi Tanaka & Yasuhisa Kogawa are Jazz Guitar Duo members. They are musicians, both well-educated, and with important previous experience. Their interests also has included "communications" with other genre's forms, so they were strictly prepared for forthcoming
profesional life. "Chronicle" is their album, where we can find 13 themes, many improvisations and constant dialogues between 2 guitars.
Basically, Jazz Guitar Duo are on therithory of so call classic or 50's jazz, but its performing offerings touches some non jazz elements, as a ambiental as a main detail. In some of its themes and improvizations, arrangments were done also in more so call psychedelic manner.
Generally, mentioned themes were done in slower mid to mid-up tempo, where specific atmosphere practically create its performing conception.
There's no doubt that Japanese fellows has offered an interesting perfoming and releasing works, and as a additional element, their materials are also acceptable for non-jazz listeners population.