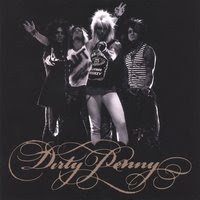 Dirty Penny are Californian band, formerly known as Antidote. They work as a quartet, and sleaze/glam followers already knows enough about them. A band constantly performs, and its albums offering from 2007 year, entitled "Take It Sleezy", strictly shows their experienced status. A band clearly describes own musical tastes and wishes, and its musical offerings is some sort of sleaze/glam rock, influental by the 80's period. Some comparazitions leads to Motley Crue as a main inspiration, but also we can find here and there some other musical traces, similiar to Poison or Crashdiet legacies. They have a very convinceble frontman/singer in formation, but all other musicians strictly and relevant did all duties.There are 12 tracks on album, a melodic lines are also strong weapon of its songs, and complete album didn' t fail in any of possible uninventive or problematic circle. "Take It Sleezy" could be a promising album for sleaze/glam followers, and especially for 80's / old-school freaks.

Posted by Branimir Lokner at 9:42 PM