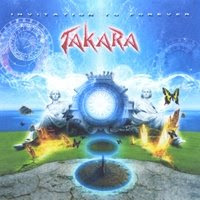 After a 7 years of silence, guitarist Neal Grusky and his Takara band are back with new album. This is its 5th issue ( band also has released a one compilation ), done with new line-up, and with some musical differences in comparazation with previous materials. Also a former singer Jeff Scot Sotto visited band and gave some back-up vocalizations. Takara has offered equalized materials, and this is expecting melodic hard rock variant, but little more harder, than the case was in the past. Technically, a band's offerings communicate with standards of this time, but with little more than ususal manniristic includings. A songs posses clear melodic as same as hittish traces, and most of present tracks are acceptable for radio usings. "Invitation To Forever" is expectingly relevant Takara album , and band is in the saddle again.