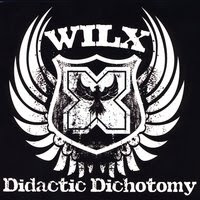 A few days before I have received a CD's of Athens, GA group WILX from their impressario Owen Gray. A band is active on homeland scene from 2005 year, works in quartet formation, and they have an album in its discography, released in second part of previous 2008 year.
"Didactic Dichotomy" is more than interesting debut, and we can find 8 relevant songs in. A band is faithfull to musical roots tipical for american heritage, but its musical offering comprise more stylish options.
Basically, Wilx play own variant of rock, with evident emotionals, passion and energy. But, band's rock approach also communicate with so call "country" influences, 70's rock legacy, jam rock psychology and even grunge additionals. All of present songs also posses evident melodic lines, and key element of its performings, lays in fact that band has sounded as a serious and experienced act. As a album "Didactic Dichotomy" cover strongest group's potentials and relevantely introduced them. I hope to wider listeners populations.