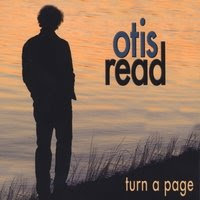 Otis Read isn't a new name in a music world. His presence and carrear has a longest history behind , and among many other important or less important duties and happenings, he is known as a performer and producer of 5 CD's on the "North Star" record label . He also managed a famous "Westlands Nightclub" in NYC. Otis also has performed in numerous different settups over the years, and his experience is huge and evident. "Turn A Page" should be a first of 3 forthcoming CD's, and main inspiration in album materials Otis finds in his previous period of living, and that was Italy. All of 13 present songs speaks about love and its specific different stages and moods. Emotionally driven songs were done in country/folk/americana style with some other stylish options in-between, as a blues and roots too."Turn A Page" also has accepted a one specific 70's feel, and some comparazition leads to Gordon Lightfoot, John Denver and Gram Parsons legacies.
But every separate track from the album speaks for itself, and shows respectable and tastefull authors signiture. "Turn A Page" has introduced Otis's authors work in refine way, and his music is specially recomandable for playing and analyzing in night-time period.