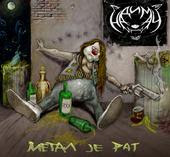 A Belgrade based horde Nadimac are certainly act with funny name and also same lirical approach/messages.They are active on domestick scene from 2003 year, and through period of existence they have received and recognize some audience attention. A group work as a quartet, and its actuelle discographical offering is an EP with 5 tracks in. They sing, or better to say create untipical screamo/growl vocalizations in native tongue, where faster backing performings has followed all of offering tracks.
Nadimac play own variant of thrash metal, fullfield with strong thrashcore tendencies, and done without calculation. You can love it, or hate it, but band all things did with passionate and strong youth energy. A recomandable track for again listening could be a title "Hrani babu da te ujede".