Peter And The Wolves - Love/Hate Thing 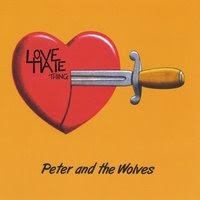 Peter And The Wolves - Love/Hate Thing

Peter And The Wolves is a group of Peter Foret. He is a long time runnin' musician/performer/composer. His carrear started back in 70's, but moving to Ottawa, in the mid 80's, he formed a Peter And The Wolves band. A mentioned group is also one of a most wanted dance act in area, and band has in own repertoair a numerous of songs/covers.
"Love/Hate Thing " are consists of Peter's authors materials. There are 9 tracks on album, performed by "so call" big band, helped by additional musicans, who plays a brass instruments. So, with a respectable horn section behind, Peter has created a fine materials which oriantations touches many fields as a jam rock, 70's rock, soul, funk... and also a many other things in-between. Some comparabilities leads to the groups as a Little Feat, Chicago or Neville Brothers, even that Peter's group posses quite enough elements of originality.
I would also say that Peter's voice in many segments associate on late Lowel George method of vocalizations, and suppose that some memories will passed through listener's ears. "Love/Hate Thing" is also a well-produced album, without any possible exsisting technical failurs. A songs are very listenable, and Peter's band also has created a respectable arrangments works. "Love/Hate Thing" is recomandable album, released by excellent performers and well-experienced musicians.