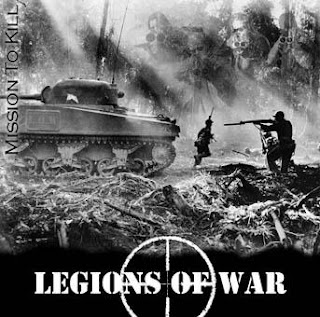 Out of Tanum, Sweden comes Legions Of War, underground metal horde, founded back in 2002 year. They work as a quartet, and till now they have delivered a 3 Demo issues : "Proclamation Of War" ( 2006.), "In the Snipers Eye" ( 2007.), and actuelle one "Mission To Kill" ( 2008.).
A band is faithfull to one sort of raw black/thrash metal. They plays without compromises, with enough brutal and agressive parts. Underground and DIY psychology are evident in its approach too. They have offered a 6 tracks, I would add with presence of also 90's influences, and more of USA acts, active in mentioned period. "Reflections From The Past" could be a more prolific track from its Demo.