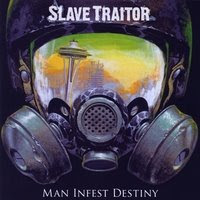 During the second part of previous 2008 year, a Seattle based band Slave Traitor has released its second effort, entitled "Man Infest Destiny".
It's a EP issue, and the same situation was also with group's first effort - " Black Narcissus " from 2006 year, a mentioned title is also an EP. A band was formed in 2005 year, work as a quartet with 2 guitarists, who also with bassist did a vocal duties. Slave Traitor's stylish and performing variants are consists of mixing elements of classic heavy, doom and sludge options. A band plays so call down tempo metal with strong dinamizations and hypnotic riff phrases. Most of materials are done in mid to mid-up tempo, where one general similiar psychology exists on all of present tracks. I would also add, that production is enough convinceble and mostly clear .