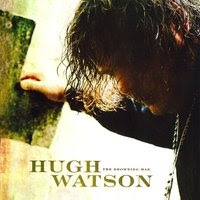 From Thibodaux, Lousiana comes out singer/songwriter Hugh Watson. As a artist, he also has a special interest for Lousiana roots music, and oftenly he use to mention about his musical background and heritages. With his friends and colaborators, a some months ago, he has recorded an album material, entitled "The Drowning Man" . "The Drowning Man" introduce himself as a artist who is faithfull to rock/blues heritages, and especially to 70's period legacies. A present songs were done in same mentioned mood, with also many soulful details and general one evident soul pastiche. A songs are mostly done in mid to mid-up tempo, but also exists a few
half-ballads. A present tracks posses equalizing qualities, where clear melodic lines has followed practically all of 10 tracks. I didn' t find any "so call" weacker detail in Hugh's and his band general messages, and "The Drowning Man" are consists of fine songs and same atmosphere. Only a mentioned 70's flavour "eliminates" presence of nowadays standards, but at last who cares. For all 70's rock/blues/soul followers "The Drowning Man" could be an interesting album.