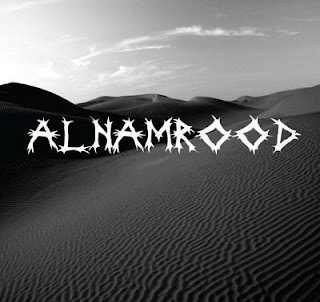 "Shaytan Productions" is a Canadian label response for releasations of musics with Eastern ethnic elements/flavours . One of group/artists from its entire catalogue is beleive or not a band from Saudi Arabia, called Al-Namrood. Their name suppose to have a meanings translate in english - non-beleiver. A group are consists of 3 members, and they have offered a CD with 4 tracks in, duration of 20 minutes.
Al-Namrood delivers its vision of black metal with hidden death tendencies, but with oriental/middle eastern flavour. Their sound comphrise a strange blast beats with mentioned eastern spices, where tribally sounding percussion leads a songs/tracks structures. A frantic screamo voice is oftenly in oposite with offering sound tapestry, and mentioned element characterize all of present materials. I would also say, that production is a better part of whole album, and Al-Namrood didn' t sucesfully finalize its interesting ideas at last.