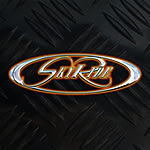 Swedish act Skyride was formed in 2005 year. During the period of existence, they have released one Demo in 2006 year, entitled "Join The Ride".
Three tracks from mentioned issue, a band has putted on actuelle album, released with own forces in previous year.
Skyride works as a quintet, and one old school approach is evident in its musical offerings. A glamourous image has followed its look, as same as 80's hard rock vision.. Their 8 offering tracks were done in manner of well-known psychology dated from mentioned period. Even of practically briliant performing and releasing qualities of members from band, its materials suffers from manniristic problems. A band has sounded too close to approaches of national 80's heroes as a specially Europe and Treat, but I have to repeat that thay have offered a fine portion of hittish and melodic songs recomandable for often listenings and radio usings. Technically, as
same as productionally we couldn' t find any weacker detail, and followers of melodic hard rock tendencies can be satisfied with band's offerings. But,Skyride's authors views suffers from lack of originalities, and band were also captured in mentioned manniristical problem.
That could be also a general problem for band in forthcoming future.
All other things shows its respectable possibilities.