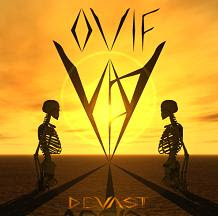 Out of Montreal, Quebec, Canada comes band Ovif . Practically a 2 persons consists formation - Eric Paquin & Jessy Bilodeau, and they did practically everything concerning on album creation and realization. Both musicians had a previous experience, and they were active in band Melodyact. Ovif is a new begining, and during the May of previous 2008 year , they have recorded a debut entitled "Devast".
Canadians are faithful to variant of thrash metal, influental by the late 80's and the begining of the 90's period. Productionally and technically, "Devast" has sounded as a modern album, maximally modern from this very moment. A productional work did a legendary Glen Robinson,
and for his job he deserve only respect. Judging by performing realizations, Ovif fellows has offered one agressive and brutal option, at the same time done without calculations. But, one of the possible exsisting problem is missings of originality, and another evident thing lays in fact that practically all of present songs are too similiar among them. Competitions around the scene is huge, and we'll see what the future brings for Canadians.