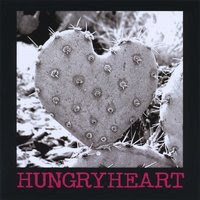 As a rumours says, Italian band Hungryheart should be a newer hope on national and worldwide melodic hard rock/AOR scene. A band has a respectable marketing team, and they did till now a lotta' efforts in promotional activities. They were founded in 1997 year, and band comphrises in its line-up a well-experienced musicians with longest previous carrear behind.
Their "S/t" album has introduced them as a group who is deeply on melodic hard rock/AOR therithory. "Hungryheart" album are consists of 11 tracks in, all of present songs are authors works, except closing one - "Gina", known from Michael Bolton's repertoire. Most of tunes were done in mid to mid-up tempo, but exists also a few ballads. They have offered also a pretty convinceble and modern productional work. One thing is also evident, after listenings of its complete album materials, and that's a fact that some of songs were done in too closest manniristic way to Bon Jovi's methods of performings/realizations, specially if we speak about ballads. In all other segments a group has showed a respectable profesionalism and interesting authors views.