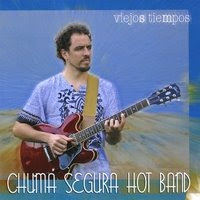 A month ago I have received a CD's and promo DVD with live and studio fottages from Chuma Segura directly. He is well-educated guitarist, composer and with his band he runnin' some period continiously his own musical visions and views. In his formation are also well-known national artists/musicians, and I would also add that his musical offering is pretty enjoyable and tasteful.
"Viejos Tempos" has introduced himself and his band as a performers who are deeply in therithory of fusion/jazz/rock/funk and groovy tendencies, with clear and refine latin flavour includings. A emotional approach as same as intuitivities are important part of his band's performing threathenings, and there's no doubt that Chuma and his mates has given a lotta' efforts that all things looks in expecting way. Improvizations are also part of its performing creativities and one element is also evident after listenings of just few tacts, and that's a specific naturalities in all present aspects of albums materials. Chuma is original author and soloist, even that music of his band has something taken from the 70's music legacies, and especially exists some similiarities with Santana and his band offerings . "Viejos Tiempos" will equally loves a followers of jazzy/groovy tendencies and fans of so call latin options.
Absolutelly recomandable !!!