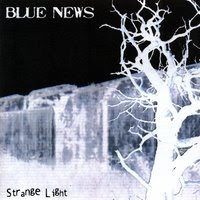 Blue News are Indiana based trio active some period on local and national circuit. The have released a 3 issues till now . "Strange Light " is a actuelle one. The band has also recently signed an agreement with "In Grooves Distribution & Licensing " ( CA ) for actuelle album.
Blue News performs variant of blues with strong hard edge, established on worldwide scene during the 70's period . They are very convinceble in its approaches, even that theirstyle knows to remind on Foghat or Savoy Brown performing options. But "Strange Light" as a album also comphrise some other elements, and band has communicated with many other details known from general 70's musical kitchen. A group didn' t fail in technically repeatable trap , and its arrangments offerings shows some other qualities. "Strange Light" relevantelly discover group as a potentially promising act with certain future.