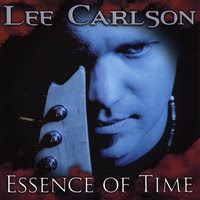 Out of Calgary, Alberta comes a guitar virtuoso Lee Carlson. He's a musician with longest history behind. He started his professional carrear as a teenager, and till now, he has released with different groups/artists/projects - 8 albums.
Lee is well-educated guitarist and his playing skillness equally touches different stylish theritories. An important performing realizations belongs to rhythmic options, so his style also apsorbes something taken from personal natural energy. Even that most of influences comes out from 90's period and legacy of guitar wizards as a Satriani or Vai, Carlson has offered enough interesting views. His themes posses respectable arrangments realizations, and as a arranger he deserve only a strong positive reactions. A second very unique segment of his musical offering and presentation, belongs to mentioned performing motorizations and exsisting of many rhythmic challengies. All of 5 present tracks are different among them, but he surelly did a lotta' effort that all things sounds expectingly in final. "Essence Of Time " is also a well-produced EP, and generally followers of instrumental rock/metal tendencies could be find many interesting moments in Lee's offering.