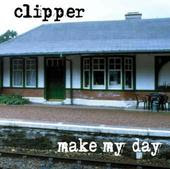 Clipper is Ancona, Italy based band, formed on the ashes of Arroyo group. As the band members explains, Clipper continiously follows up direction established in Arroyo days. "Make My Day" is still actuelle album from 2007 year, and band has received some positive reactions from its work. Clipper in own way tries to research americana and other american roots heritages, and in same way they offers own views.
"Make My Day" comphrises 11 tracks, and all of songs are mostly different among them. But, band hardly tries to offer one specific message through each of present tunes, and various stylish mood and performing aspects under the americana approach, circulate on album materials. Clipper members also shows respectable knowledge about american roots history, and its arrangments creativities on each songs separatelly belongs to convinceble side of its authors works. We'll see what the future brings in their case, but "Make My Day" as a album, satisfies in many aspects.