Banshee - Cry In The Night 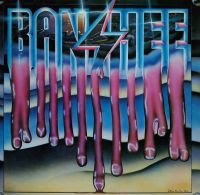 Banshee - Cry In The Night

I have received from Rick Hill band's manager another issue from Banshee, and that's a EP - "Cry In The Night" .That was the band's self-released EP on cassete in 1986. Later on, material was re-released for "Metal Blade" records on LP and cassete in 1988. Also limited copies of CD's were pressed after the band's reunion in 2000 year.
Re-mastered version of EP is here and there, and band has offered in period of realizations a 5 tracks in. Melodic power metal with well-known hard rock includings was ( and is ) band's approach ..
It seems that some of present tracks were done in little so call heavier and unpolished way, specifically titles as a "Back Your Way" and " I Beleive". But, a slower one "The Stranger", was certainly a best part of EP. In period of releasation "Cry In The Night" has realistically introduced a band's forthcoming possibilities.

Labels: Banshee - Cry In The Night