RzR - Thunder In A Bottle 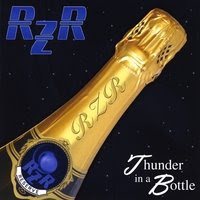 RzR - Thunder In A Bottle

Out of Vancouver, British Colombia comes a RzR band, comprised of two members - Ray Roper, who is vocalist, guitar and bass player, keybordist, and Jo Ziccardo, who is responsible for drumming. Both musicians had a longest carrear behind and respecatable experienced status. RzR as a band should be open up a new chapter in its carrear, and "Thunder In A Bottle" is its first discographical step.
RzR has offered a pretty enjoyable portion of songs with fine melodic lines and defined by simply but convinceble performings messages. RzR are musically somewhere in the period of golden 70's and also golden 80's, and its approach touches elements of classic rock, symphonic rock, melodic rock, AOR... A pop pastiche is also one of leading elements of group's views, and similiarities of legacies of acts as a Kansas, Styx, Supertramp, Foreighner, but at the same time Status Quo from mid period of British band's carrear are evident in RzR messages.Canadians has offered a 14 mainly equalizing tracks, and practically complete offering materials are acceptable for radio usings. I' m not sure that today "Thunder In A Bottle" could be a comercial product, but present songs surelly deserves a wider listeners attention.

Labels: RzR - Thunder In A Bottle