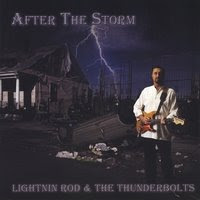 Out of Michigan come Lightnin' Rod and his Thunderbolts band. He is guitar player, singer and songwriter , and "After The Storm" is his second effort. A first album entitled "All-American Blues", and its important to say, that song from mentioned issue - "Dreamful Of Blues", was a number one song on internet blues radio. The Thunderbolts are also consists of well-experienced performers, with longest carrear behind.
" After The Storm" are consists of 11 tracks in, except "John The Revelator", all other are Rod's authors works. Rod posses a soulful and pleasent voice, even that in some places vocally he use to step up to "harder" therithories. With his band, Rod has delivered a portion of rock and blues songs where also we can find some ballads, or better to say half-ballads. "After The Storm" isn' t a album with expecting blues/rock atmosphere, and one more "cooliest" ambient dominates through Rod's tunes. In my opinion, closing theme, instrumental "Flight Of The Free Spirit" is recomandable for again listenings and replayings.

Labels: LIGHTNIN ROD - After The Storm