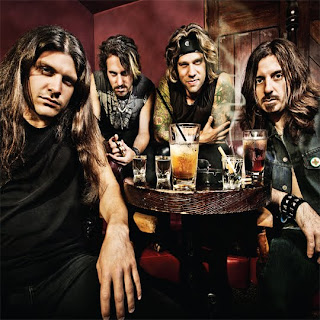 NEW LIBERTY - The Uninvited
Written by Branimir Lokner
Friday, 23 December 2011
NEW LIBERTY
" The Uninvited "
( Self - released ) 2011.
CD
Rock/hard rock - USA
New Liberty are newer act, coming out from Philadelphia, PA, now locate in Califirnia. They are quartet, and " The Uninvited" is their actuelle album from July this 2011 year. A band has introduced themselves as a melody driven guitar rock act, pretty influental by the 80's movement, and less 70's period as well. Their self-financial album are consists of 11 mainly equalizing tracks, performed in the vain of rock and hard rock approach. Americans knows to remind on some well-known names from the past era, and I have found some similiarities with the earliest Deff Leppard style. A band " look" as a coherent team, and all of present songs posses strong melodicity, distant playings, relevant production, and generally accceptable and positive view as well. Nothing spectacular new, but with positive approach and attitude too.
Recomdable tracks are : opening one - " The Sever ", and " Hollywood ( x-rated ) "...
Rating : 7 / 10
C / o : www.newlibertyrocks.com
Posted by Branimir Lokner at 5:54 PM