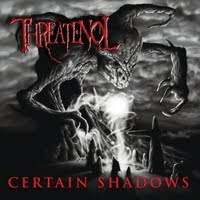 THREATENOL - Certain Shadows
Written by Branimir Lokner
Monday, 02 January 2012
THREATENOL
" Certain Shadows "
( Self - released ) 2011.
CD
Death metal - USA
A first steps of Sioux City, Iowa based band, started out in 2002 year. After some persoal changes, and with a new name, a group seriously started its story in 2005 year. Threatenol are quintet, and during the this 2011 year, they discographicaly debuted with full-length album, entitled " Certain Shadows ". They are expressive death metal act, influental equally with the 90's legacy, as same as with newer tendencies, but they also shows some own specific " tricks" and elements of originality. Their death metal is part atmospheric, part with so call technically driven details, and also with some thrashy includings as well. A songs are done with serious arrangments threathenings, and with relevant productional includings too. They have introduced themselves with 13 tracks, with mainly equal standardizations and performing approach..." Certain Shadows " is interesting debut of Iowa death fellows, worth listener's and also media attantion.
Rating : 7, 5 / 10
C / o : www.threatenol.com
Posted by Branimir Lokner at 11:43 AM