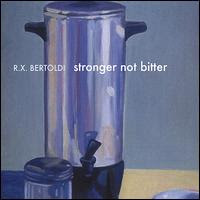 R.X. BERTOLDI - Stronger Not Bitter
Written by Branimir Lokner
Tuesday, 17 April 2012
R.X. BERTOLDI
" Stronger Not Bitter "
( Time Workd Music ) 2005.
CD - USA
Roots/acoustic/folk/songwritings
R.X. Bertoldi is a singer / songwriter, whose carrear is active some period continiously. He is also recognized as a talented author, and his signiture has something of old -fashion style and mannirism. " Stronger Not Bitter " is a his album from 2005 year, but he made a reissue of present materials. " Stronger Not Bitter" are consists of 10 pretty listenable tracks, where opening song " Black Coffee In The Mornin' " is more than others aired on national and private radio programs. All things from the album he did practically without any following additionals.
He played a guitar, drum, harmonica, and his materials are simply. but elegantly produced and released.Powerful lyrics and soulful vocalization characterize his complete opus, where 70's and 80's influences are equally present in his authors creation too. Bertoldi is one of a newer acoustic performer, whose methods of playing songs accepts also elements of rock psychology and approaches. But he surelly did a god job with " Stronger Not Bitter " album, and we'll see what the future brings in his case.. Recomandable...
Rating : 8 / 10
C / o : www.rxbertoldi.com
Posted by Branimir Lokner at 8:51 AM