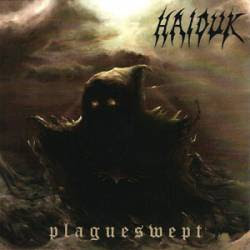 Haiduk is a newly-created solo project Of Luka Miloica. He started out in 2009, and during the January 2010, he has released a self-produced Demo album, entitled " Plagueswept". With 8 tracks and 30 minutes of music, Haiduc deliver a specific vision of atmospheric and raw death metal. An interesting arrangments circulate around present songs. Some of tracks has expandier instrumental lines, some are little more vocally orientired. Haiduk has also offered in some parts of his Demo something of doomy views, and black metal ambiental traces are present too. Even that black metal as a genre isn't his main oriantation, many symbolical associations exsists in his songs. I would mention a 3rd track - " Dark Forces Path" as a song with many structural complexivities, and on the other hand, in my opinion this is also a representative part from " Plagueswept " issue. " Plagueswept" is in the process of promotional activities, and hope that presentation of Haiduk's works will come in right hands and ears.