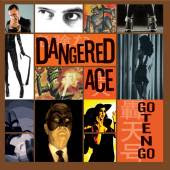 
Dangered Ace are newer act, formed by bass player Paul Ranieri, with key intention, to create something new and enjoyable, and enough unique.
A band is based in NYC, their line-up are consists of refine and experienced musicians, a brilliant vocalist Chandler Mogel, and technically convinceble guitarist Jon Bivona and drummer Steve Fruda. They have released a debut album, entitled " Gotengo" with 10 tracks in. Danger Ace has offered an interesting authors conception, and its music is some sort of hard rock/ rock melange, fullfield with swing and other dancable elements as well.
In the other hand, a members from band reflects an cohesive energy, its music posses impulsive fragments as same as melodic includings.
Yes, Dangered Ace has showed a many unique tricks, and originality is their middle name. I would add that one generally positive atmosphere dominates throughout its album materials, so in two words, satisfaction- guaranteed.