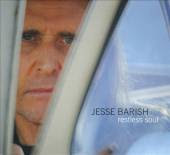 JESSE BARISH - Restless Soul
Written by Branimir Lokner
Wednesday, 26 January 2011
JESSE BARISH
" Restless Soul "
( Voidecho Records ) 2010.
CD - USA
Melodic rock /pop/soul
Jesse Barish is a veteran of many music wars. His carreare started out practically in 60's period, and during the years he has performed and toured with many known and less known musicians. He toured among others with Leon Russel, Freddie King, J.J. Cale, and cooperated with Marty Balin. " Restless Soul" is his latest effort from October 2010 year.Jesse was author, he played flute and harmonica, and complete album he was recorded with Jeff Pescetto. Jeff was responsible for all instruments and backing vocals. " Restless Soul " is a mature product of well-experienced author, with tons of emotional pictures, pleasent atmospheres, and fine harmonizations. His melodic rock/pop songs are fulfield with evident and clear soul pastiche. Many reminiscents of 60's and 70's periods are present on 18 songs from album. Most of the songs are acceptable for radio usings too. Finally, " as a album " Restless Soul offers a good feelin' and same vibrations. Recomandable for listening in night time....
Rating : 8 / 10
C / o : www.jessebarish.com
Posted by Branimir Lokner at 9:31 AM