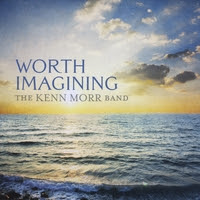 
Kenn Morr is a singer/songwriter from Colebrook Conecticut and a leader of his The Kenn Morr band. He is more than active continiously for a years, and " Worth Imagining " is his 6th release. Actuelle album are consists of 10 equalizing well-penned tracks, done in americana / folk rock manner, with pleasent vocalization and distant and certain playings. Kenn Morre lyrical occupation touches themes as a love, loss, relationships, loneliness. Some of reviewers compare his author's legacy with Gordon Lightfoot's method of composing and performing, but I would add that hidden Van Morrison influences exists " here and there" too. But, as a author Mr. Moore knows how to create a fine melody, and his album is full of pleasent places...

Posted by Branimir Lokner at 7:53 PM