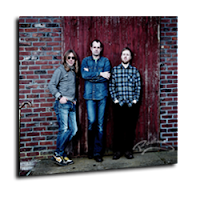 
Railroad isn’t a newer name on worldwide underground rock scene. They have been active about a decade, and fronted by key person, guitarist, vocalist and author – Arne Dieckmann. During the period of exsistence, a group has delivered a portions of hard rock/boogie, rock and roll, and with actual one, they have released 4 albums : „Where To Go“ (2007.), „Something Good“ (2009.), „On The Run…Live In Netherlands!“ (2011.) and „Railroad“ S/t CD from March this, 2015 year.
Railroad are company deeply influental by the 70’s/80’s variants, and they know to remind on such a groups/acts as: AC/DC, Rose Tattoo, Krokus, Status Quo…Their sound is raw and unpolite, but with clear performing  attitude. For all followers of older genre’s variants, a Railroad message could be interesting and acceptable. A group  also all the time deliver a recognizable portion of energy, and similar performing options. „Railroad“  posses, in mentioned description, 11 presented tracks, without leading song, but with equalizing atmosphere and approach.


Posted by Branimir Lokner at 5:04 PM