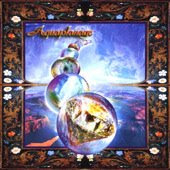 Out of London, UK comes a band Aquaplanage. Some of the members participated in Yes cover group FRAGILE, and that's also clear that complete line-up had a previous experience. It's also interesting, that material from Aquaplanage S/t album was written in 2001, but recorded in 2008 year.
A group from UK is another recomandable and convinceble progressive act. They have followed one evident psychology of 70's period and also its musical realizations rooted in mentioned era. "Aquaplanage" album comphrises 70's classic progressive offerings with strong arrangments
includings, fine performings, and modern productional views. A group is conceptually influental by the Yes and Genesis legacy, even that its album materials are consists of many refine parts and instrumental dialogues. "Aquaplanage" CD has also an interesting cover artwork, and 8 pages ilustrated booklet.